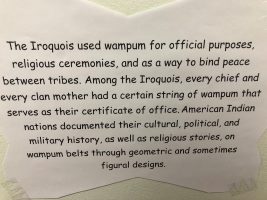 As part of the fourth grade curriculum, Mrs. Rachel Capozzi’s Class is studying New York State history. The current unit focuses on Native American people of the region, particularly the Iroquois Confederacy, known as the Haudenosaunee, or “People of the Longhouse.”

The Iroquois did not have a written language, so they often conveyed their history and stories through the oral tradition of storytelling.

Another traditional form of communication they developed was the use of Wampum, or cylindrical beads made of white and colored shells. The wampum belts, which were considered extremely valuable, were designed and hand-woven, documenting the cultural, political, and military history, as well as religious stories of the Iroquois people.

For a fun, hands-on project that would introduce her students to Wampum, Mrs. Capozzi gave the students a template to use to create their own wampum designs, coloring in the boxes in a design they then reproduced using colored beads on pipe cleaners. Their vibrant designs now decorate the walls outside the 4th grade classrooms.

The Iroquois were known as “The People of the Longhouse,” because several families would reside together in longhouses made of wood and bark. Each longhouse was around 20′ wide and ranged from 40 to 200 feet in length. The second project the class did as part of the unit was to create longhouses out of shoeboxes.