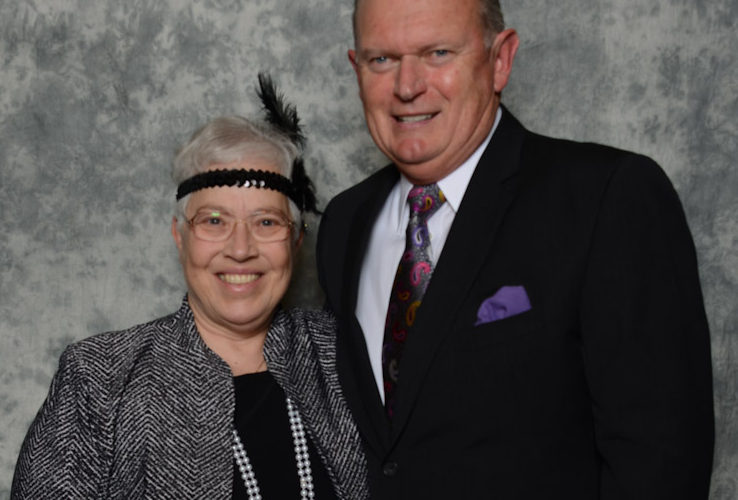 With a record crowd on hand, and many dressed in the theme of the Roaring 20’s, 207 people filled the Monroe Golf Club to support Hope Hall and honor three long-time Hope Hall pillars: Kenneth D. Bell, Dorothy R. Pecoraro and Sister Kathy Weider. After a warm welcome by Hope Hall Board Chairman Robert Montgomery, who introduced Senator Joseph Robach. Senator Robach spoke of his support of Hope Hall and how vital Hope Hall is to the community. Senator Robach introduced Master of Ceremony Mark Gruba, WROC Sunrise at 8 Anchor. After a hearfelt Prayer by Sister Diana, guests were entertained with dinner music by the Gateswingers Big Band while enjoying an exquisite Monroe Golf Club meal. While enjoying authentic Italian cookies for dessert, Bob Montgomery and Sister Diana presented awards to the night’s honorees. Following this, Bob Montgomery and the Board surprised (totally!) Sister Diana with a recognition of her efforts on behalf of Hope Hall’s students. After an inspirational speach by Hope Hall Almunus Steve Gambino, those in attendance saw the first viewing of Hope Hall’s new video (shot, produced and donated by Dixon Schwabl), which was a reality check as to why we were all there. The evening ended with dancing to the Big Band sounds of the Gateswingers, celebrating the event that raised over $50,000. None of this would be possible without an outstanding, dedicated committee led by Chair Donna Murano and consisting of Linda McGrain, Donna Montgomery, Anne Veness-Bell and Kelly Smith. Thank you to these women, and to all of the generous Gala sponsors.